A modern, high performance diesel engine can only deliver the power, torque and reliability that the manufacturer intended, if it has a plentiful and clean supply of fuel. Anything that limits, reduces or contaminates the flow of diesel, will impact the performance and output of the engine. To prevent contaminated fuel from having an effect on the diesel injection system, engine and equipment manufacturers install a range of fuel filters and water separators, to catch and remove dirt and water from the fuel line.

Water contamination within fuels can be attributed to a variety of sources. Careless refuelling is an obvious common cause, though there can also be water present within larger refuelling tanks, even from the fuel supplier, that is passed unknowingly into the machine fuel tank. As diesel is highly hygroscopic, it will draw in water from its surroundings, particularly in humid air. This is made worse in biodiesel, which is up to 30 times more hygroscopic than standard fuel.

Condensation is also a major cause of water contamination. As hot fuel is returned from the engine’s fuel injection system, particularly in a common-rail system, it causes the fuel tank to heat up. Having the fuel tank mounted next to a hydraulic oil tank can also cause it to heat up during the working shift. At the end of the day, as the tank cools, this can cause condensation to form, turning to water within the tank.

Once water has entered the fuel tank, it can remain in a range of forms. Dissolved water has been absorbed by the fuel, in effect diluting the diesel to a certain extent. Emulsified water occurs when very small droplets are suspended within the fuel. This is sometimes known as colloidal, when one liquid is suspended within another. Then of course there is free water, which falls out of suspension within the fuel and settles at the bottom of the tank.

The first opportunity to prevent this water entering the fuel injection lines is through the use of a water separator, usually built as part of the initial filter housing. Though not able to remove emulsified or dissolved water, these devices can remove free water, which collects in a transparent bowl below the main filter. This should be regularly drained by the machine operator and the service team, to prevent build-up over time.

In extreme operating conditions, free water in the bottom of a fuel tank can freeze during low temperatures, potentially damaging older steel tanks. It can also freeze in fuel lines. Tanks can be prone to rusting, with corrosion contributing to the particles of debris in the fuel. Small particles of rust scale can quickly clog filters, while the addition of water in fuel also reduces the lubricating properties of the diesel, which is critical to the performance of the fuel injectors. 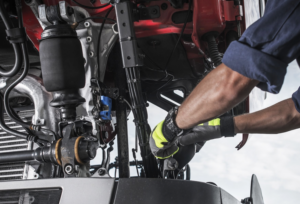 Fuel filtration typically starts with a fairly rudimentary strainer on the fuel pick-up pipe. This is used to block large quantities of solid contamination and rust. This will be followed by a series of increasingly fine fuel filters, that can catch particles from around 100 microns, right down to around 4 microns. It is worth bearing in mind that a typical human hair is around 50-70 micron in diameter, so even the initial mesh filters will be massively reducing contaminants in the fuel flow.

Absolute filters have a rigid membrane that allow particles of a specific size through. Nominal filters use a non-rigid membrane. This will allow larger particles through when under pressure, to prevent a reduction in fuel pressure within the injection system. All fuel filters are wear parts requiring regular replacement. While manufacturers provide suggested service intervals, individual site conditions may require more regular filter changes, depending on the fuel condition. When fuel filters require premature changeover, this is a good sign that the fuel system is suffering from contamination and that it should be drained and the system flushed to prevent damage to more costly fuel injection components.

If the fuel pick-up pipe, which draws fuel from the tank for delivery to the engine, is allowed to take up large quantities of water from the bottom of a tank, it can quickly cause damage within the fuel injection system and inside the engine itself. This can cause pitting, as large water droplets contact hot metal surfaces, or cavitation, where bubbles of water vapour are exposed to sudden high pressures, rapidly condensing back into liquid form.

This is why the FuelActive system is so effective, by relocating the pick-up pipe away from any water that may have collected at the bottom of the tank and ensuring that only the cleanest fuel available is passed to the engine’s injection system.

Initial effects of contamination, through water or particles of dirt, will be reduced engine power, rough running and potentially harder starting from cold. If caught early enough, water can be drained from the fuel system, filters can be changed and long-term damage avoided. If ignored, or when the contamination is particularly bad, water and dirt can block filters, starving the engine of clean fuel and reducing power.

Today’s engines operate at much higher temperatures and under higher pressures. Because tolerances have become tighter, contamination control for fuels is critical. Blocked or reduced capacity filters will force the fuel pump to work harder to maintain a consistent flow of diesel to the injectors. This can lead to degradation of the components within the fuel pump and will require either repair or replacement of the pump to return the machine to full performance.

If the contamination is allowed to pass both the filters and the fuel pump, it will eventually reach the fuel injectors, where damage can be catastrophic. Modern fuel injection systems, particularly the high pressure common rail, work at incredibly elevated pressures of over 2,000 bar, with ultra-fine tolerances. Contamination will cause damage to injector nozzles, needle valves and control valves, which work with tolerances of just 20-30 microns.

Any blockage or damage to these components will cause degradation to fuel spray patterns, leading to poor combustion and reduced engine performance. It is far better and certainly less costly, to prevent contamination getting this far along the fuel system. Early intervention and prevention, will prevent poor performance and costly downtime.

FuelActive manufactures and installs the FuelActive® fuel pickup unit, which prevents water, dirt and other contaminants from entering the fuel system. The patented FuelActive fuel pickup unit helps to preserve operating efficiency and performance, avoids costly downtime and reduces harmful emissions. FuelActive use has been proven to reduce fuel consumption by 5% and as a result CO2 by 5%.

FuelActive manufactures and installs the FuelActive® fuel pickup unit, which prevents water, dirt and other contaminants from entering the fuel system. The patented FuelActive fuel pickup unit helps to preserve operating efficiency and performance, avoids costly downtime and reduces harmful emissions. FuelActive use has been proven to reduce fuel consumption by 5% and as a result CO2 by 5%.